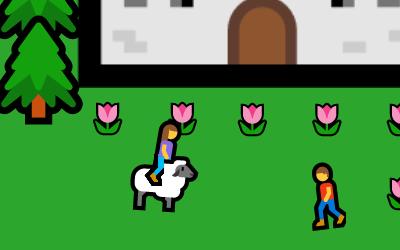 You work at a zoo where the animals get to roam free in the fields during the day. But when a storm is coming, you have to bring them back into their pens. You can chase them back or ride them back.

All graphics are emojis.

Works on iPhone, but not so much on Android because they don't have all the emojis with color built in.

The JavaScript is minified, but there is a link to the TouchBasic code in the github.

Kevin Whinnery: Hah! This was pretty adorable. You could imagine coming up with some pretty fun "towers of Hanoi" style puzzles where you have to capture the animals in a certain order. Needing to use the octopus to flush out the pig was genius. Worked: - Having the octopus capable of swimming was a great touch. If the game were to be built out further, having different animals capable of different traversal techniques would be great. - The pig was super frustrating to catch, but it felt appropriate! I could hear the squealing in my mind. - The visual of riding the different animals was hilarious. Much comedy to be found there when building out this concept. !Worked: - Why could I pick up the plants? I didn't discover a purpose for this feature, felt like a red herring. - The pig was faster than the horse? - It seemed like the octopus was the only animal which had the traversal upgrade that I loved so much

Anonymous: Good: - Excellent use of the competition themes! - Quite a big world to explore - The use of emoji for all game assets! - Simple but well-done game mechanics - Several NPCs with funny dialog - Each animal has its own ability (e.g swimming) or behavior (e.g walk really fast) - Good game progress indicator, it's easy to see which animals are missing or have been collected - Able to pick any items or drop them anywhere. Fun :-) - Good game mechanics, player movement, love the back riding part! - Works on iPhone!

Jupiter Hadley: This is such a clever and cute little game! It's really great to play through.