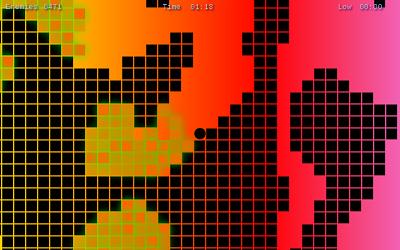 The caverns of shadow land have been infected by the "Glitch", an alien virus that affects the very fabric of space time itself. The world around you distorts as it grows at a frightening rate through the caverns, pulsing with an energy that warps the direction and strength of gravity. Only you have the power to restore stability to the affected areas, but do it fast!! ...as if it is given too much time to grow, it will be unstoppable in it's advance.

Jupiter Hadley: I had some gameplay issues with this game. It seems like a reall cool concept, but the game would start rotating? While rotating, it lags out - going so slow. This lag throws the feel of the game off. Once it is done rotating, you can play some what smoothly, though the character gets caught on blocks easily and then its back to rotating. I like the idea of this game! If only I could play it as fast as I would like too....

Robert Podgórski: The game got super low fps when the screen started rotating