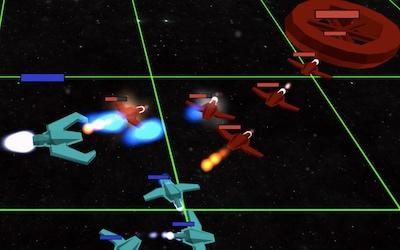 Jupiter Hadley: Neat game! There is a lot going on despite the restrictions of this jam.

Christer Kaitila: great 3d ships and nice smooth movement! the sounds and meshes were cool. I found it hard to shoot anything, at first I thought the gun was not working but then I realized it was a close range weapon until later powerups kicked in. The game kept getting easier and cooler as I went on, but it was so hard at first I almost stopped playing before I got to try the cool powerups! great work on the radial timers for skills, too! nice job