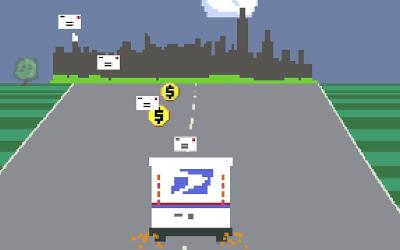 Vote by Mail: Funding Not Found

Play as an employee of the postal service keeping democracy rolling along by collecting mail-in ballots before election day!

Desktop: Press the left/right arrow keys to turn and the up arrow key to jump

Mobile: Drag left/right to turn and tap to jump

Noël Meudec: This game is a basic car game (vertical scrolling type, like the original Speed Race). Technically it is OK, it is functional and the scrolling itself is well done. There are music and sound effects, which is cool. Here are some things I would do to improve it: - Make the items pop earlier, as it is barely playable at times - Improve the effect when items pop (I don't know, it feels sudden and strange) - Make the jump useful (I never used it as I didn't see the point) - It would be good if the road was not just straight (well, slightly waving) line: add some turns - Make the game last longer if the player plays well Overall, the game is simple and functional, but with some tweaks it could be even better.