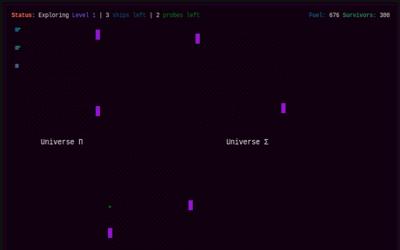 This game is a memory-game mixed with puzzle exploration game, where black holes transport your ship to new universes on a trek to find a place to call home.

- Use WASD to move your probes and ships
- Find your way through universes and avoid black holes that lead to a Universe Not Found
- A failed journey leaves behind a red marker to aid future adventurers
- Your probes (green) are deployed first
- Your ships (blue) are then deployed if no more probes exist
- You have a limited fuel supply on each ship, running out will mean certain doom for that vessel

Christer Kaitila: What a cool sci fi roguelike! I really like how the stars twinkle. The coolest idea is how the different smaller map sectors all start to appear on screen together, completing a larger maze. I needed all my extra coil advantages.. and more! Lost in space, in a second mother galaxy, drifting for an eternity so far from home, cursing my failing memory as I breathe the last gasp of oxygen... great job on the game!

Nathan Lie: Great memory game, only suggestion is refreshing the amount of ships you have when you reach a new level, so that the guessing can start with the same amount of chances as before. Otherwise, a volume control might be nice. The Web Monetization bonus of extra level I feel is the strongest decision of the additional bonuses.

Ewa Mazur: Engaging memory! I wanted to play again and again and again. So many bonuses for Coil subscribers - I felt like a VIP :D The game is very consistent - graphics, music, story, gameplay - everything keeps the same feeling. If I would think of anything to improve it would be adding something more visible to give the player an info about reaching the next level. Cool game.