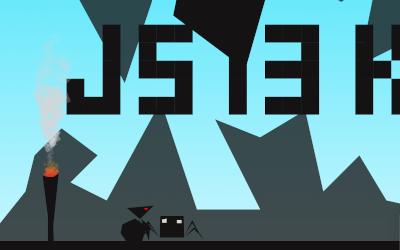 Another little story of triangle man! Can you try to get out of cave? It isn't that easy as you think.

Controls:
ArrowLeft, A - Move left;
ArrowRight, D - Move right;
ArrowUp, W - Jump;
ArrowDown, S - While jumping you hit the ground and damage enemies around (It works only if you have enough stamina);

P.S. For me it works well with high res only in Chrome. For better playing experience in other browsers I would suggest to try to reduce the graphics quality with 1, 2, 3, 4 num keys.

Spartez Team: Hello once again! We played your game last year! We were excited to see you again on the competition :) As last year, the animations and sound effects are great for such size :) I also liked the color scheme and the setup of the scene which I'm sure were inspired in the classic Another World. Thought, I was curious how the triangle got there. What on earth did they do to be there? And after the third screen I was very confused and a bit bored of the mechanics. I think we can borrow some ideas from Another world to make it more interesting play. What is the thing that moves us in AW? In the cave scene we learned very little about the character other than he seemly transported himself to somewhere and that this place is not friendly (the algae in the water, the leeches...). You start to ask yourself some questions "Where am I?" "Who's that creature running in the background?" "What should I do?"... and then *BAM* you meet the creature and figure out you need to run. Fast. On your game I felt from a cage, and the spider came to me. I could kick it (as the leeches in AW) and it'd die. There was some sticks with seemly other triangle men and I was blocked from moving on to the next screen until I killed the spider. Next screen and I'm again going through the same motions. There was nothing new to get me interested and the story of the triangle man didn't move in any way :( I had all the answers of everything and nothing changed anymore.