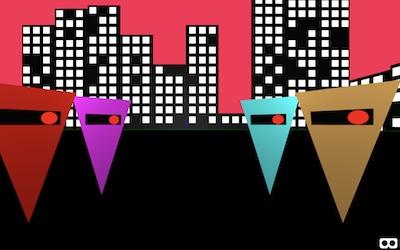 During the 80s, you were part of an elite team who succesfully protected the galaxy against various threats. Just as you thought it was safe, they're back! It's up to you to protect your block against them.

Look at enemies to aim and fire. Click or Touch to run in the direction you are looking. Good Luck - look at Start to start the game.

Tested on Safari, Google Chrome and Firefox on desktop, but the game is intended to be played in VR. Tested with Google Cardboard on an iPhone Xs.

Sébastien Vandenberghe: Those aliens looks pretty good and the FPS like style is compelling to play with. A bit more attention to z fighting on the score or the blinking building lights might help reaching a better immersion. I was wondering about the mini map at first but I accommodate quite quickly.

Josh Marinacci: Clicking to move did not work on the Oculus Quest, but other than that i worked perfectly. I do wish there had been a cool sync soundtrack, though. The graphics perfectly fit the 80s theme.

Fernando Serrano Garcia: It needs more work on aesthetics but the concept is really cool. I really like the minimap, it is super useful for this type of games. I would like to have support for the controller so I can shoot them without using the gaze on 3dof and 6dof devices. Overall it has potential, just need a bit more work to polish it.

Diego González: Tested on an Oculus Rift with Firefox and a Note 10 with Samsung Internet. Game is fun to play, if only a bit slow. It might benefit from the enemies coming faster at you. Loved the graphics, missd opportunity with Audio. Nice implementation of the HUD to spot enemies, but placement would benefit from being in the corner as in more traditional FPS games. Can say I had a lot of fun with this one. Good work!