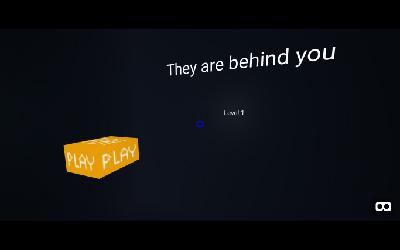 They Are Behind You

You are stuck in a cursed world and now you have to find your way out, but watch out with the evil entities that wants your soul.

CONTROLS: point the cursor to the play button to start playing. WASD to move.

Sébastien Vandenberghe: The idea is really different from other VR games and I wonder how it could have work with teleportation for instance as playing with the keyboard was quite challenging in VR

Josh Marinacci: I couldn't make it work on the quest. The concept is interesting thing. You should persue it.

Fernando Serrano Garcia: I like the idea behind this game, I see how it could easily evolve to something longer where you have to escape from the zombies without looking back. I missed that it wasn't longer. I tried it on desktop because on VR I couldn't get it to work, I was in an invalid position and I couldn't move (Oculus Quest).

Diego González: The game has potential but I think there's a lot to be done to onboard people and make sure the players understand what;s going on. I could not make it work on the oculus rift, and I making sure there are sensible fallbacks for these experiences can be benefitial to the game.