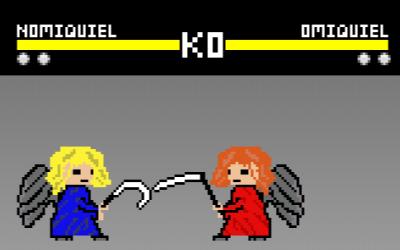 The Reapers: Tournament of Destiny

This 2D fighting game is based on fighting game fundamentals known as footsies or neutral game. Due to the size limit, the game's scope is minimal: you only have one attack and a parry. The goal is to keep your opponent at bay and to avoid getting hit. The game is played in rounds, and the first player to win two rounds wins the match.

Will you bait your opponent's attack and parry it? Or will you try to get in close and land a hit? The choice is yours!

On the green fields near Mount Serrat, two otherworldly entities, Omiquiel, the devourer of souls, and Nomiquiel, the bestower of breath, come together once every thousand years to fight for the dominion of the living realms.

In a battle known as The Tournament of Destiny, they fight...