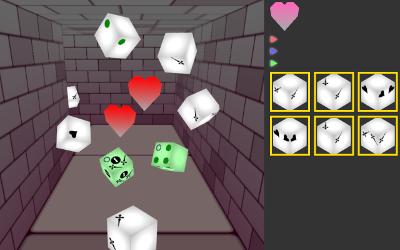 Uh oh, lost in yet another dungeon! Rumor has it that on the 13th level there is an exit, although it may not be unguarded.

With this game, I wanted to recapture the feeling I had when playing old-school RPGs with no built-in map.

You'll want to collect as many attack (†) and defense (♥) dice as possible. Stronger die have levels (1, 2, 3, etc...), so you will need to pick up resource (●) dice in your tile to use them. Click on a die to pick it up, click on it in your inventory to throw it. Look down (down key, or swipe up) to throw a die into your current tile (good for defense) look up to throw a die forward (good for attacking). Moving and throwing dice take a turn, everything else is free. If all else fails, run away!

Jason Carter: Enjoyed exploring the dungeons. Very impressive for 13kb! (an in general I'm of the opinion that 3D games are so underrepresented on the web). Moving around was smooth, great camera effects. Didn't notice any render issues at all. Gameplay-wise I found it a bit confusing. I found floating dices and hearts, I couldn't go through them, didn't know what to do or . Eventually I found a die, then run into another group of floating dies but didn't get the idea, was a fighting an invisible ghost? A bit more of help in the game or a more intuitive gameplay would have helped. I feel like with that awesome maze rendering you could create many more games. Thanks for participating in the compo! :)

Jupiter Hadley: Really interesting game! I like the feel of using dice to get through levels, though I wish there was more feedback for the player when it comes to what is going on. I liked the look and size of each dungeon as well.