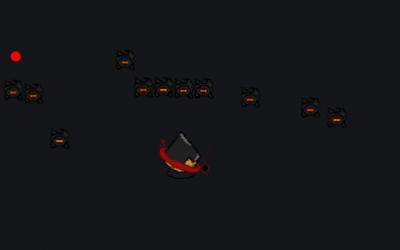 Since your master died in vain. You must defend the space nation, your the only hope, the last space bender.

Dann Sullivan: Good job on squeezing an intro in there, the feeling of the bullets bending was pretty cool (even if it's quite a simple sensation). What I would say is that the fact that the enemies are shooting at the gate rather than the character becomes quite obvious as you move around more - solid effort though.

Tom Greenaway: Good: - The initial story/narrative was nice. Felt funny and interesting. To improve: - Felt hard to make out the visuals. The contrast wasn't so great. Maybe lighting mechanics could be added to make it feel more lively? For example some lighting effect around the player?

Jupiter Hadley: I don't really understand what I am doing, but I found the intro to be very entertaining.