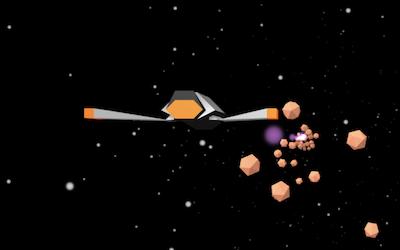 It's time to save the world from asteroids again.

Get in your little space ship already!

Steven Yau: Surprising, despite the constant movement where I was flying through space, I didn't feel any motion sickness. I believe that is due to decision to keep the objects moving at a constant speed and in the same direction. The sparseness of space also helps a lot here. The space ship movement is not one to one with my left hand so I generally felt I was 'detached' from it and the rotation of my hand was ignored too, which threw me off as well. I was expecting to be able to shoot up/down/left/right because it felt like a gun-like experience. Improvements could be made to the feedback to the player when the ship was hit (eg the health bar flashing or a red flashing ball around the ship). I would be tempted to experiment with offsetting the position of the ship from the controller so that it's mostly centered in the players view so that the player had a more 3rd person look of the game behind the ship. I'm not sure if that would be too much of s detachment or if the relative moment still works despite the large offset.

Sébastien Vandenberghe: This is great and I love low polys :-) This is a fun little experience where it feels good flying the ship and cleaning the asteroids. Godspeed !!!

Fernando Serrano Garcia: I really like the controllers and camera of the space ship. The graphics are simple but quite nice, both the space ship, the star field and the meteorites. I hope you will keep developing it and add new features because it has a lot of potential. Good job!