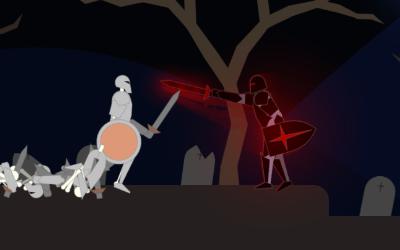 You are a valiant knight. You have been cursed by an evil warlock: from time to time you transform into a vicious villain.
To break free from the curse you had to find the cursed mirror that has been used to cast the spell on you.
As soon as you break it the undead around you begin to rise. You have to fight until you come to the final battle.

Fend against the undead until you come to the final battle.

Curse energy will grow over time, until you transform in your nemesis.
When transformed, you are stronger and faster. Attacks from enemies won't damage you and will heal you instead, but they will deplete the curse's energy.

On Windows: Firefox
On MacOS: Chrome