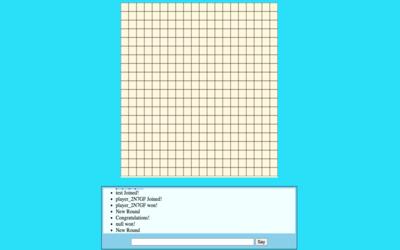 Welcome to the multiplayer board game, this is a simple game, on joining you will be given a random name (if you do not type) and then a random colour .
Now you can try coloring 5 continuous blocks on the board in either up-down, left-right or diagonally, and also you need to destroy the sequence of your opponent, the player who colors 5 continuous blocks first wins.

Christer Kaitila: It worked so perfectly! It was fun to chat with everyone and we started drawing on the board, trying NOT to trigger an endgame 5-in-a-row just so we could doodle like lite-brite or minecraft art =). I would love an interactive pixel art version of this without the gameover logic, since with more than two or three players on at once it's easy to ensure nobody ever wins if everyone spamclicks in the general area of action. As a two player game, it works perfectly as is! Very nice work!

Abiyasa Suhardi: A simple mutli-player board game. Instead of turn-based, it’s a realtime game where players put their block colors on the board in order to win or to block others from winning. Simple but fun to play with friends. A little bit polish on the UI (for example visual effects for new game or winner notification, or an indicator for the delayer) would make the game visually more appealing! Good job!