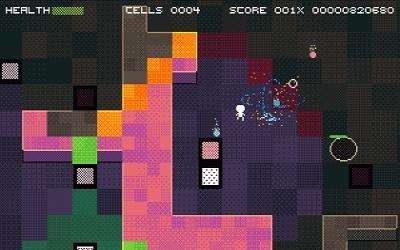 The Achromats have taken the worlds color offline! Raid their colorless lair and vanquish them all, restoring the world to it's technicolor glory. A twin-stick shooter playable with gamepad or keyboard+mouse. Huge thanks to Herebefrogs for naming the game!

Diego González: Absolutely stunning. Incredibly FUN - good feel, perf, gfx, sfx... this game has everything a 100MB game wishes it had. I'm not exaggerating, this game knocked my socks off. Amazing work.

Spartez Team: Really nice game. I like the esthetics and your choice of color pallete - kind of pastel colors. Monsters when they move, like jump I thought at first that fps is too low. I miss some small momentum in a player movement. It would feel much smoother. Also it would be nice to have some bigger goal, feeling of progression (even if illusory). Otherwise it gets all the same very quickly. Maybe more weapon types or some synergies (like I can have union of three with some effects). (effect like burn or poison, even more differentiation with range) Score was not enough for me to get me going. It would make more sense if there would be some concept of levels. Maybe people could compare score and compete with each other. I like that multiplier is reset when you get hit.

Pedro Fortuna: Technical is well executed, but the game concept could probably be improved a little bit to avoid becoming too repetitive. Overall, good job.

Mike Cook: What a great idea! I loved the territorial weapons and powering them up over time. This could really be expanded into quite a tactical area-control shooter. The graphics are full of character too, I found myself playing it for longer than I realised! I hope you get a chance to extend this - it's a great starting point for a game!

Jimmy Joe McGurl: Awesome twin stick shooter and loving the support for controllers!! The sound and pixel art are fantastic, and I love the different weapon types based on the area you're in. Great unique spin on the genre.