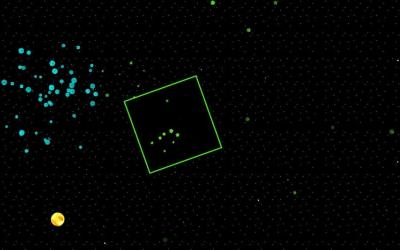 You are a Black Hole drifting through space. To cross a level you need to devour all the planets. Devouring a planet increases your size. Don't touch the edges or the Black Hole will implode.

There are 18 levels in the game with increasing difficulty.

Dann Sullivan: Quite fun, I enjoyed the levels where the planets bounced around. Took a while to 'unlearn' the Snake-esque behaviour of not being able to double back on yourself. Levels with static planets are pretty redundant after first planet is collected. Good work on them not generating in 'instant-kill' zones.

Nathan Lie: A nice twist on snake, using a more irregular object than the usual snake shape. The difficulty levels provide some nice challenge, and the effects and aesthetic are effective. Could be a little punchier in the sound effects department, but overall quite good. Unfortunately, there was no Web Monetization bonus included with this game.

Ania Kubów: I love how this game took a classic such as 'snake' and gave it its own twist! The square getting larger and larger and taking up 'space' in 'space' was brilliant. Great work and very addictive.

Raf Mertens: The concept and idea is great. Similar to the original snake games but with your own twist. I think the physics and visuals are engaging combined with the sounds, keeping the game interesting aesthetically. The progression doesn't always work and in some cases gets easier rather than trickier. After a while, it did feel like I was playing the same levels over with only small variations. I’d like to see more challenges with the level design, but I think it's a fun minigame with a playable concept behind it.

Ewa Mazur: Really cool game, I like the particle effects and visual part of the game, but I can't see anything related to Web monetization, no tiny bonus for Coil subscribers...