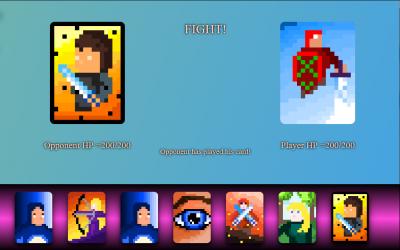 After 200 years of tyrannical rule of the Empire, the people had borne enough. The White Capes emerged as a backlash to the injustice faced. Violence was inevitable; the revolution was unstoppable. Help the White Capes overthrow the King.

The Backlash is a card game where you have 8 cards in your hand, one of them being a legendary card. There are three types of cards, offensive, special and legendary. Special cards can be used to defend oncoming damage while offensive cards deal damage. Your goal is to have more health points than the enemy at the end of the round.

Controls:
Click on draw cards to start the game. Hover over any card to see the details of that card. Click any card to play it. You can click the enemy card as well to see it's details and so on.

Anonymous: It takes a lot of work to make a card game, especially one with synergistic relationships between its individual cards. Thanks to the second-turn effects of many cards, it allows these synergies to exist in a game where only a single card can be played at a time. A valuable improvement this game could make is to add some visual feedback for the interactions between cards - it's hard to tell sometimes if a defensive card had blocked some damage without reading all the cards individually and doing some extra math.

Jupiter Hadley: This is a very interesting and complex game. Some of the text was cut off for me, and I did feel the cards were difficult to understand, but the art is great.