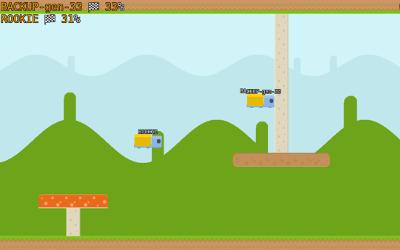 The Back-up of YOU

Fly a spaceship through a randomly generated level.
Use LEFT, RIGHT and UP ARROWS to steer.
You need to finish the level within given time.
Then interesting stuff starts happening under the hood - an AI is trained first on your data, then is improving further without human supervision. After a while (the airmiles are really just a progress meter) you will get a chance to race against the trained alogorithm. While you will be racing the improvements will be still ongoing, so each next race you start is going to be against an improved AI (the generation is indicated in the name of the bot player).

Christer Kaitila: What an incredibly interesting concept! The nn training going on is the star of the show - the gameplay gets old very quick because, while random, it's all the same, but if you slog it out and get to the AI stage, things get interesting! Imagine if you had more data space to import YOUR training data or a pre-trained set of bots to give players something interesting to do from the get-go, that would be extremely cool. I'd love to play against the "ghosts" of many different players, and against these bots after 1M generations, without having to train them myself! I really liked how smooth the game ran, and the movement was nice too, it had good feel. I was incredibly happy that the player doesn't explode on impact like flappy bird! good choice! All this awesome project needs is more content in the levels to add interest and you could get players to train the most awesome looking bots. What a cool game. Just needs more "fun" while we do the training. Keep up the amazing work. This was a very creative and fascinating entry.

Anonymous: Great job - I like the fun usage of references to concepts like Airmiles in combination with the character - Great concept of playing against a trained algorithm as appose to just CPUs or local multiplayer. Suggestions - the controls are a bit unresponsive for my personal taste but you can argue it sort of adds to the feeling of the game. - enemies or other type of elements during the tracks would make it more challenging. Awesome work!

Jupiter Hadley: Neat game, but I have no idea what airmiles are within the game.