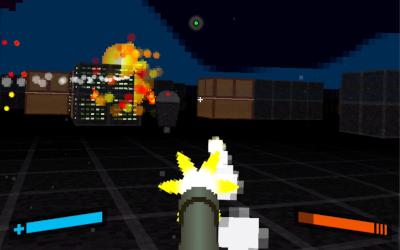 The station on LZ-13 was taken over by its AIs! You must take it back... with style!

[SWAGSHOT] is a throwback to 90s first person shooters, when games were about defeating countless enemies, except for one major difference: playing aggressively and taking risks is rewarded.
Performing jump shots, combos, or even making direct rocket hits will result in a much higher score.

Anonymous: Wow you have this doom experience with different weapons etc. Graphic was consistent. Game was a bit too hard for me, so I didn't survive for too long. I'd probably expect more space and enemies not jumping out of nowhere on my back. Maybe I was just weak player... The idea about extra point for things is neat, but couldn't really test it. I died too quickly I guess. Also I'd prefer to have something more than simple score attack (like finish some level, some simple progression etc.) From technical perspective you did really great job - even sidestep generates extra effects. Anonymous: Very immersive first person shooter! Great job. Is there anything special you get when you pay via web monetization?
back