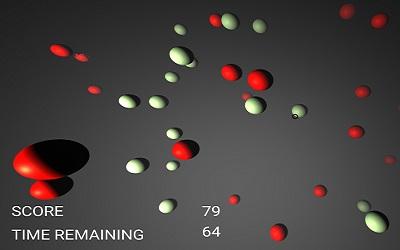 Steven Yau: It has great accessibility with using a gaze only control system. This mean it could be played on everything from the Google Cardboard to the Oculus Rift. The UX could be improved where it would wait for the user to be ready to play (eg gazing on a start button and have a count down to entry into the games). The score and timer was very hard to see as it was fixed far bottom left, just outside of my FOV. It would great if it was more central or fixed in a world position. There was only one movement pattern for the balls as well. An improvement could be made here by having fewer balls to start with and as time goes, increase the number balls into the game with different predictable patterns, similar to Fruit Ninja.

Fernando Serrano Garcia: I believe the game just run so fast in my laptop and the Quest because it was constantly restarting from the initial position. The concept seems interesting but I just could not play it properly

Sébastien Vandenberghe: The idea is excellent :-) The main issue is that the game is quickly providing a huge anxiety feeling by seeing all of those atoms moving everywhere on display. It becomes really hard to cope with what is happening. Aside from this, GG it works in 13k :-)