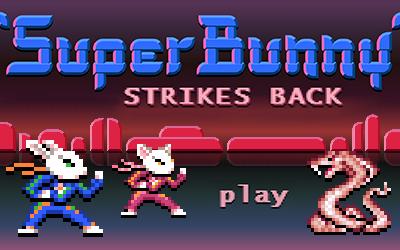 Take Kitty on a quest to find Bunny lost! Journey through dark forests and snowy meadows, pass through a great waterfall to finally reach the steppes and confront the Lion King! Clear the game to unlock Super Bunny and then hop with him at increased difficulty!

The game is a Progressive Web App and can be installed on desktop PC or mobile device using Chrome web browser. Mozilla and Opera are supported as well. Enjoy!

Anonymous: Awesome game! Very fun dynamics. Got to Stage 5, ~10k score. 1. Custom bonuses for Web Monetization users would be nice to have. Anonymous: First all, I would like to say that is an amazing port for the original Super Bunny. I would like to say that it is an amazing work as you were able to fit that game under 13k with all the art and assets. I think the game is interesting but I think some more clear rules to it for a modern take will be great as for example I know you can't attack the snake if it is looking toward you. I thought you are not able to attack any enemy if they are looking toward you but I tried that with the enemy that change its direction and I was able to attack from both directions except for the later enemy. I think it would be interesting if it is a global rule so you can have multiple different types of enemies. Also, I think you go more modern by having abilities to go up or down or enemies that affect surrounding areas under or above. But overall this is one of the best ports with interesting mechanics but in some levels it feels that I am waiting for my death or waiting for timing which feels a little bit outdated and make the game more slow-paced even the moving platform suppose to give the feeling of urgency and the need of continuous movement.