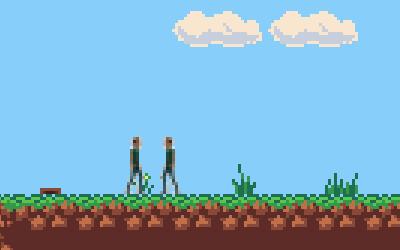 Start over is a very short puzzle platform game.
When the user presses the space bar, it will send them back to the beginning of the level with a clone of the previous attempt.

Anonymous: Clever game dynamics! 1. Would be nice to have a bit more different style levels. 2. For web monetization, would be awesome to have extra features for supporters. 3. Mobile support would be great

Pedro Fortuna: The concept is interesting but needs development. It kind remind me of an old game called Vikings where you had different characters, each with a different skill and you would need to use them to solve the problems. Perhaps it should be possible to revoke/undo a clone. I became completly stucked after spending a clone doing something silly and then I couldn't move past an obstacle. Only later I learned that I could use the R key. Puzzle-like game that is entertaining ++ Lacks music and soundfx -- Character animation looks good but too blurry perhaps (higher res would be better) -+ Game is short --