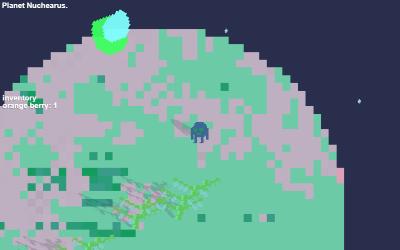 Controls:
(while on planet) WASD to move, SPACE to interact.
(while on vessel) W to accelerate, AD to rotate, SPACE to stop, E to exit vessel.

welcome to my game where you pretty much just roam space and give out muffins to the people you meet ;) Each planet gets a unique look, different trees, even a generated soundtrack. There's even different languages to learn if you can find a sage who can teach you. cheers and let me know your thoughts!

Raf Mertens: I thought this game was really cool, the simple graphics weren’t a problem and I quite enjoyed roaming the universe giving out muffins :) The music really adds a slightly unsettling/ethereal feeling to the game and I think it’s clever how it moves and changes with the gameplay. The only criticism is that I wanted more quests. Overall, the game has great imagination and you’ve done a superb job of creating a little immersive 13KB world :)

Ahmed Khalifa: First of all congratulations on finishing your game for the JS13k competition. I think that is pretty interesting game with huge universe which is exciting. I would recommend having more feedback about collecting stuff from trees so it is easy, also space traveling could be easier to control and no need for crashing mechanic, I think you should focus on the aspect of exploration and surprise similar to frog fractions game. overall, great game, sorry for short feedback but it is really nice and love the graphics and effects of moving around and having all these different planets to explore.