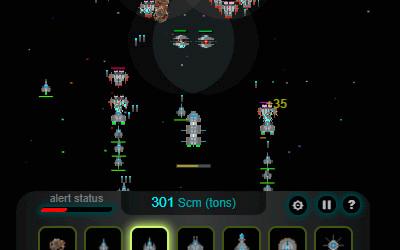 Year 13 after climate change, the Earth is uninhabitable.

The last space freighter, with 13 million fertilized and cryogenized human ovules, leaves the earth, with 500 tons of Scriptium (Scm),
towards robotic bases built over decades, in anticipation of the climatic catastrophe, on inhabitable planets in the star system SAO215398
in the Phoenix supercluster of galaxies located 5700 Mly away.

Scriptium (Scm) is a new synthetic fuel that is necessary for intergalactic travel and also for building defense elements,
and can be extracted from the wreckage of destroyed enemy spacecraft.

Once all the Scriptium is over, the space freighter will run out of fuel and the mission will have failed.

Your mission, as the commander of the last starfleet, is to escort and defend the space freighter at all costs so that it reaches the bases and human race does not become extinct.

Raf Mertens: I think a lot of thought went into the game and the story is very creative. I love the retro/arcade feel and simple but addictive mechanics. When hitting level 5 it went from easy to annihilated in seconds (though I did retry and found spamming light fighters seemed to do the trick). I think a game like this could hook players in especially with additional upgrades and progression items. The pace could be a little quicker and maybe the money system needs scaling with the game. You can’t earn more than 500 - so perhaps that could be adjusted. However, after an initial slow start, I did find the game engaging for several rounds and I enjoyed how the game progressed!