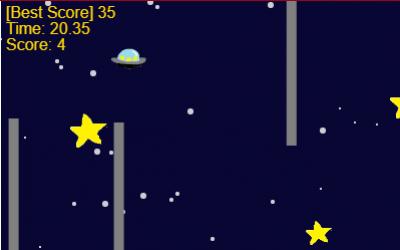 A spaceship collects stars in outer space.
Be careful that there are many dangers in the universe.

Collect more stars than your rivals!!!

Dann Sullivan: V. simple, and some of the stars spawn within the walls.

Ahmed Khalifa: First of all congratulations on finishing your game for the JS13k jam. It is kinda more relaxed and controlled version of flappy bird. I think the game could have more interesting patterns for stars and walls instead of random generation so there is some interesting maneuver by the player side also to avoid having stars on top of walls. Another thing, Maybe there is different type of stars (colors) where each one have a different effect, one give you high amount of score but also increase the game speed for couple of seconds, one make you destroy walls or run through them, one could be bad as it invert the controls, etc. Having a variety of these objects will make the player think about which one they need to take and which one they will need to avoid and will add a little bit strategic depth to the game. Overall, thanks for creating your game and congratulations on finishing it in time :)