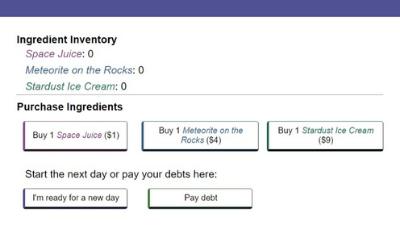 Welcome to space! You're Spacebar, a spacebar with a knack for getting into trouble. Most recently you've found yourself indebted to an unruly gang of Function keys in an effort to pursue your dreams of opening a Space bar!
Manage your inventory, customers, and money to pay off your debts and establish the greatest space bar in the galaxy!

All controls in game are through buttons in the interface and with web monetization users can choose the gameplay settings from the home page before starting the game.

Nathan Lie: Great management game where balancing customers' asking price against your own costs makes for an engaging, albeit short (on normal) game. It just needs a little more information here and there - the amount of customers remaining in a single day would be useful information to expose - and the Web Monetization feature opens up some nice twists on the game for those who want to master it.

Noël Meudec: Simple but addictive. I completed the 3 levels of difficulty. I would speed things up a little bit though, as I spent a bit too much time waiting instead of actually playing. Also, adding some automation after a while (maybe the ability to set the minimum prices I want to automatically sell, etc) might motivate to try the end game. Adding arts and creating an atmosphere around the solid game mechanic might also enhance the experience. Overall, that game got me and I played it much longer that I thought I would. Good job!

Ewa Mazur: Fun story. Consistent design. Maybe it is worth letting non-subscribers know in the menu that if they are subscribers, they will be able to use the customize option?

Lee Reilly: Nice, clean UI. Managed to pay off my debts and appease the function keys within a week (game time, not realtime 😉