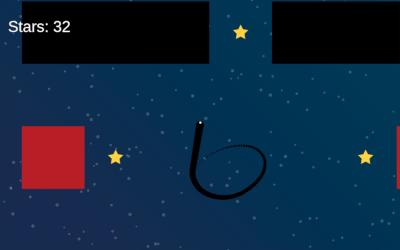 A little known fact is that space is actually filled with giant space worms who race around the galaxy gobbling up stars. They are constrained by fluctuations in the space/time continuum that appear as black boxes to the worms through which they cannot pass. They are hunted by errant meteors which devour their heads and they have little defence again.

You are one of these worms, on a mission to eat as many stars as you can...

Use an onscreen joystick to move - touch and drag on touch screen or click and drag with left mouse button. Eat all of the stars. Avoid meteors and killer space/time continuums!

Dann Sullivan: Pretty simple fun, wish there was some sort of a timer mechanic even if it just awarded stars based on speed.

Björn Ritzl: The controls were pretty good and the game ran well, but the gameplay was lacking a bit to be honest.