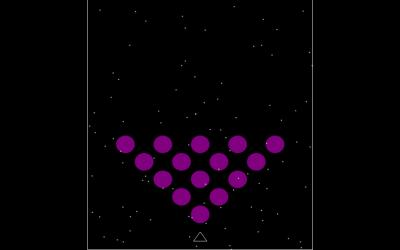 Björn Ritzl: Congratulations on submitting a game for the jam! Like the description says its a very simple space shooter. I think it could be made more enjoyable through some fairly simple changes: * The enemies start really far away, my bullets can't reach them and I can't move closer. You could either increase the range of the bullets, have the enemies move closer or allow the player to move upwards. * Moving and shooting using the arrow keys is perhaps not the optimal key configuration. What if you move shooting to something other than down arrow? Perhaps spacebar? * The enemies are really slow and doesn't really pose a problem. What if you increase the speed to force the player to act faster and aim better to avoid getting hit by the incoming enemies?

Ale Bles: Simple game, a bit of Asteroids (art) meets Space Invaders (core game). If you want to extend on this you can try ripping out Kontra, the game as it is right now shouldn't give you too much trouble on a pure vanilla canvas.