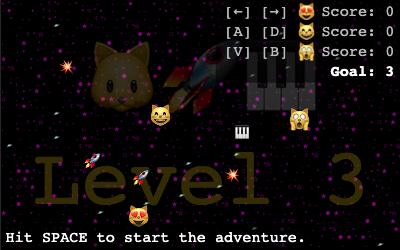 Jupiter Hadley: What an adorable idea! I found it really hard to control, but I guess that's the point, which makes a lot of sense!

Ewa Mazur: After realizing what's the idea of the game is I can tell that controls is a main part of it, so if I tell you that controls aren't so obvious it doesn't explain the problem, because the point of this game is that controls can't be obvious... but the problem is - I couldn't figure out what I was doing right away. I was playing the game on mobile and on desktop and the confusion level was higher on mobile - I was tapping and didn't see any response, cat was doing something but it didn't feel like I was controlling it. I found out about the idea on desktop, because you have this additional info about keyboard controls. And after I figured out the controls the game made sense and was really fun. Maybe you could think of some kind of control info inside the gameplay (on mobile), maybe just a kind of tapping animation will help to feel that I'm actually doing things right? Right now on mobile I can't even figure out if I've tapped correctly. My first impression was that the controls aren't working. I also couldn't figure out why I lost. I think it was because cats were hitting themselves too many times, but maybe you could show some kind of life bar? Using emojis is making the game really cute. I really like the changing background colors. Really good job as a first entry. We really hope to see you next year :)