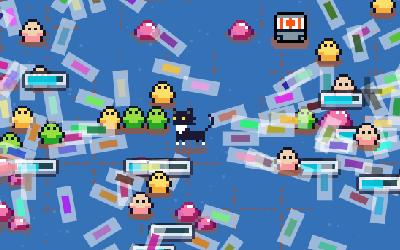 Space Kitty is thrown out of their spaceship after being wrongly labled as the imposter! They land on a strange planet, they must clear 9 rooms of mobs, collecting ammo, HP and gun ungrades to complete (by warping via a terminal) 5 levels before facing a small boss encounter. Beat the 45 rooms and the mini boss encounter to save Space Kitty!

Clear all rooms on each level before warping to the next 9 rooms. If you get stuck then break the object with your gun!

Ania Kubów: Space AND Cats! Aside from the great pixel art and character development this game was a joy to play in terms of controls and advancing to next levels. I enjoyed how pathways were revealed and that there was a map option for the player. A very impressive game with an even more impressive amount of levels and bosses. Just, wow!