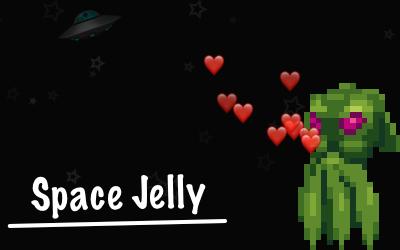 Space Jelly is a MOBILE GAME in which you control an alien that lost control of its ship and needs to continue its travel using ... alternative ways of transportation.
On that trip, you'll find like-minded folks that will gladly join you on your way.

Ewa Mazur: It took me 2 or 3 tries to sense the idea and it's funny. When other aliens were joining my character it was a bit confusing at the beginning - I needed to focus to get the sense which one is mine, but the more creatures were joining the easier it was to control them - or was it just me learning the controls? When I had a really big number of fellowes with me the noise they made was quite annoying and game performance was lower. I love the creature appearance - it's cute <3 I like that you cover all important game elements like Splash Screen, HUD, and a nice background. I really like different kinds of platforms and the way they impact the game. Music and sounds fit well. Oh, and sometimes when a spaceship drops the alien it loses immediately - that's the tricky part about generating the start of the game randomly - losing without doing anything can be frustrating. Except for those tiny problems the game was fun.