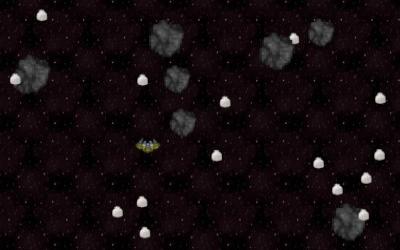 Homo sapiens are a messy bunch. They attempt to be cleanly (and do a decent job!) but end up polluting their surroundings regardless...it's year 2254 and the pollution has left the planet. You are performing community service by cleaning up the junk that has inevitably started to pile up. It's dangerous work though ... asteroids zipping about and even black holes! Collect as much of the trash as you can in this simple, fast-paced game.

Controls:
- Up arrow key to accelerate
- Left / Right to rotate the ship
- Hold the "A" button while accelerating to get a boost
- Use "P" to pause

If you lose the game, simply reload the page and play again!

Jupiter Hadley: Interesting concept! I do wish that the game detected where the player was, and then didn't spawn items in directly on them, killing them.