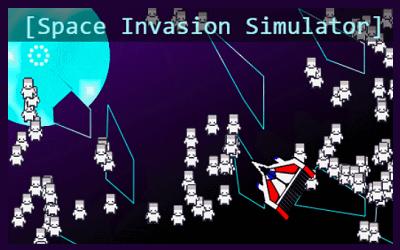 STORY: You are the last pilot in the fight, these aliens are sucking people up left and right. The faster you defeat the alien ray the more people you will save.

(WEB MONETIZATION: Want to upgrade from a crop duster to a jet? Log in with coil!)

COOL FEATURES:
- Music
- RayCasting
- Twittering
- Lemming/fleeing population beneath you.
- Randomized movements
- Fastest time stored in local storage
- Where you click to fire the crowds will also scatter from the sonic boom.

Ania Kubów: I love how to game built up tension by having the lemmings/people flee around you while a timer dropped in time, AND the population figure dropped too! Very well executed in creating a feeling of 'hurry'. Great work, I would definitely play this again.

Nathan Lie: Small game that is a little simplistic, but it's got a lot of fun accoutrements. It's a little hard to figure out at first, but it crashed a few times and was a little laggy on my machine. The Web Monetization bonus was a nice little upgrade - I appreciate that it was fully cosmetic and preserved the challenge of the game itself.

Ewa Mazur: Info about the subscriber bonus could be posted in the game menu and also inform non-subscribers what they can gain from subscribing. It is a pity that the game has a weak framerate under FF, and the jet did not load, despite the subscription.