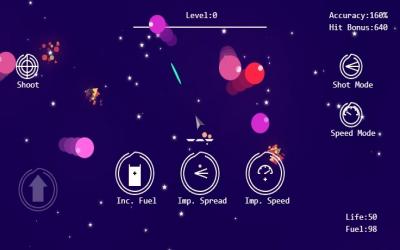 Make sure there aren't any more gums on space!
Hurry-up, Earth is in troubles!

Joep van Duinen: I like the progression system and the charging shots. Nice concept and look for the game. You could start out a little bit faster I feel in terms of speed. The game is quite difficult at the start, so it would be nice to level up a little bit more quick. Great job overall!

Nathan Lie: Good game concept, but the controls make it difficult to get far. Allowing the player to do more than one thing at once (e.g. shoot while moving) and making the controls a little more responsive (no delay when pressing buttons before the action is performed) would go a long way. The game indicates that there is a free upgrade for using Web Monetization, but it's unclear what it is.

Ewa Mazur: Nice dynamic gameplay, very nice coherent graphics, web monetization could be better labeled - good that there are "thanks and good luck" at the bottom, but the fact that I can only set the upgrade after a while is confusing. It would also be a good idea to let non-subscribers know about subscribing.

Michelle Mannering: - polygon shapes and graphics, are super awesome. Nice aesthetic - controls aren't 100% intuitive; be good to have an overlay on the screen before one starts so can then get into the game - collision effect is probs my favourite - so music would go really well with this - ship movements could be a little smoother - but overall very nice!