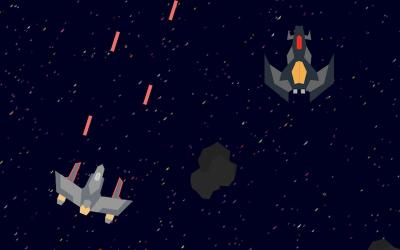 Christer Kaitila: I totally love all the cool spaceship designs! it was a fast and furious fight but eventually I won! I like the ring of asteroids around the outside. awesome work! it plays really smoothly and looks great.

Raf Mertens: I can imagine this would work well as a multiplayer io game like Starblast. The challenges are well thought out, with multiple AI opponents and space rocks to contend with. The game runs very smoothly too. I'm impressed. A few more points: - Sometimes at the end, there was 1-2 opponents left and I was wandering aimlessly trying to find them - More maneuvrability would be great - speed boosts and faster turns would add more action to the game - Really like the clean and colorful visuals + sound effects