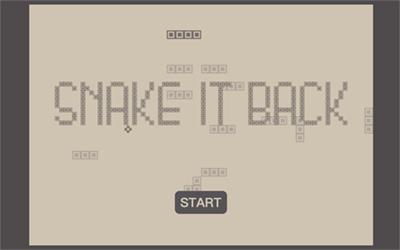 A/D/W/S or LEFT/RIGHT/TOP/DOWN to turn around the snake.
Try to eat food to get scores, and heart to get HP.

Anonymous: Incredible idea - the retro Gameboy vibe really evokes the era of gaming where games were nail-bitingly difficult and the challenge brought the fun factor. Only improvement I'd suggest is a small bugfix - if the player puts in two inputs in quick enough succession, the second input can be read before the snake turns from the first input, so it's possible to make the snake turn in on itself (i.e. you can make the snake turn right while it's going left, which should be impossible). Might be useful to either prevent inputs until the next "frame" or just buffer them. Anonymous: Congratulations on finishing a well-polished game. - I loved the graphics inspired by Nokia 3310's snake game. - The music was a little bit repetitive after a while of playing but there was an option to mute it which was great as not every 13k game is able to fit new stuff in the code in that small foot print. - The idea behind letting the player play against all the previous version is very interesting. I think you could investigate it more, what about a mode where only the final state is the only thing so you are creating a maze. What about if I can kill all my previous ghosts as they kill me? What if at the end the ghost stayed solid and create more obstacles? What if the ghosts are able to eat my pellets too? Having all these types of question only reflect how good and interesting is the design space you are working with, I think you should go for a bigger version and investigate all these questions. Overall Great job and very interesting entry.

Florian Rival: Love the idea! Very interesting game, though maybe I would have restarted the ghost snake even when they have finished - so that the challenge is becoming even harder? The style of the game is great too. Great job!