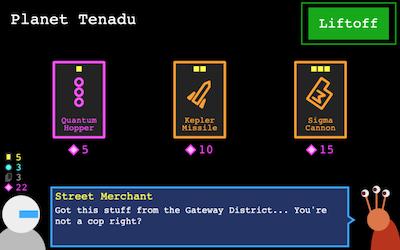 🚀🃏 SHUTTLEDECK 🃏🚀 is a game inspired by infinite-runners merged with deck-builders.

You control the vessel of a Space Courier delivering a very important package. To win, you'll need to successfully reach multiple consecutive planets while avoiding the dangers along the way. Collect minerals to purchase ship upgrades. Encounter quirky characters selling sketchy merchandise. Build your set of abilities and hone your timing and strategy.

Gameplay Tutorial:
- Avoid asteroids which will damage your shields
- Collect shiny minerals to buy upgrades between levels
- Tap/Click the cards on the UI to use abilities
- You can only use an ability if you have sufficient energy
- Red, Green, and Blue cards are for basic motion
- Orange cards are weapons used to destroy obstacles
- Magenta cards are special functions like healing or invulnerability
- Blessing cards can be granted to upgrade max energy, shields, and hand size

Ania Kubów: I was very impressed with this game! The purchase checkpoints really added to the story telling and I loved the little characters and variety of purchase options. It would be great to clarify that the rocket is moved by the clicking coloured cards as I did not get that from the GamePlay Tutorial explanation. Great job!

Ahmed Khalifa: First of all, great job to fit this interesting game into 13k. I think the game has potential but I think it will be easier if the cards have arrows on them for movement than just colors because it is harder to pay attention up and down on the cards and connect the colors. Another idea would make the movement is not card dependant so the player can move freely between the lanes. I don't recommend that one that much, I like that the cards have movements and fire and etc, it give it that feeling of slay the spire and other games, I would recommend adding a way to adjust the deck and remove cards, etc. Also, instead of having a terminal state, you could make the run ends when you run out of cards so the player need to be more intelligent about using the cards. Another thing that could make the player think more about usage is to add the number of cards remaining of each card when it appear to pick so the player know if that is the last card or not, also showing maybe the potential of each lane so the player know if they should use their last card to move to that lane or just ignore that. overall, I am excited about that idea of the game as it blends cookie clicker with slay the spire in an action based of way.

Björn Ritzl: This is a pretty well made game with a challenging gameplay and nice upgrade paths. I quite like the blocky, flat graphics as it gives the game some character.