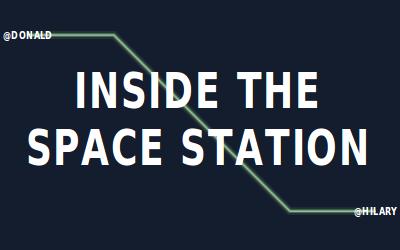 You and your fellow spacefarer are stranded and almost out of fuel! Luckily, you notice an abandoned space station nearby. But it's a pretty glitchy place... who knows what lies inside?

Find the shuttle in the space station, make sure it's powered up, and escape before you run out of oxygen. Avoid glitches and explosions if you can.

This is a co-op game for two players! Each player should log on in a separate browser.

*** WHAT IF I'M HAVING TROUBLE CONNECTING SYSTEMS TOGETHER? ***

Once you're able to create wires, *both* players must go to each of the two systems simultaneously, as close as possible to the center of the word.

Elle Chen: would be nice to have a single-player version (team up with the AI)

Jupiter Hadley: The game had some issues running for me. What I saw and what the other player on the server saw where completely different. I liked the concept around the game - too bad it didnt work out. :/