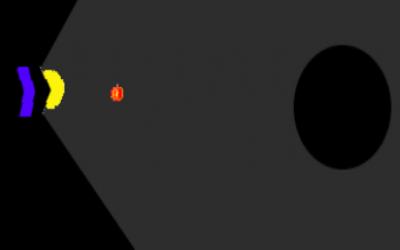 This is a shooting game where you can't see back, you need to shoot the enemies by predicting their positions in dark......Make 60 to win the game

Controls :
1) Use the right and left arrow keys to move around
2) Use the space bar to shoot the enemies

Anonymous: This games got a nice idea - taking a twitchy shooting game and adding some predictive elements to it. It's nice and simple, but it could use one or two extra gameplay elements such as movement to keep the core gameplay loop from getting too stale after a while.

Florian Rival: Game idea is very interesting. Would have been interesting to make the game a bit faster at the beginning maybe? Graphics style is very minimalist, maybe adding a few effects (like when killing an enemy) could make it more enjoyable? Gameplay is very easy to understand, that's great! Good job!