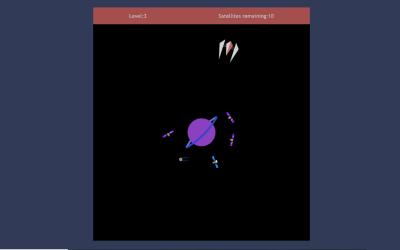 You control a spaceship that has to deliver some satellites to planets, but every time a satellite is located you have less space to locate the remaining satellites.

To win the game you must locate all the satellites safely without any of them colliding with an already placed one.

Jupiter Hadley: Though there are only three levels, the mechanics and graphics are really sleek and I would love to play more.

Lee Reilly: Nicely done. Additional levels with increasingly difficulty plus some sound would keep me playing this longer. One of the very few JS13K games that I was able to complete - thank you! 😊

Raf Mertens: I think the game was quite fun to play. I completed it in 5 minutes, so it was a little easy with only 3 levels. Some simple sound effects and more levels of progression would be a good improvement. It's a good concept, maybe there are ways it can be developed further.