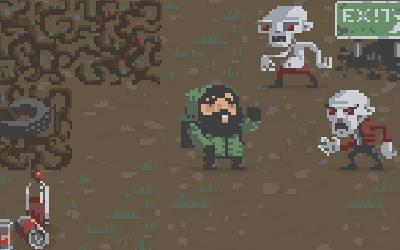 Rogue Scavenger is a JS game based on graphic assets and game design from Unity's "2D Roguelike tutorial" https://unity3d.com/es/learn/tutorials/projects/2d-roguelike-tutorial
The Unity's version has a 30Mb size. I wanted to pack it in 13K. Anyway, those 14 video Unity tutorials are great ;)

Moreover, I tried to use no HTML5 Canvas or WebGL magic. You'll see a lot of "div" containers being printed and moved on screen: classic DHTML, man :)

Use cursor keys. Search for food. You can destroy walls. Avoid zombies. Survive.

Tomasz Wesołowski: Umm I have to start from day one if I lose? Brutal! Well, it says rogue, what did I expect... But first levels are easy, I don't like having to retry them. This game has a ton of potential, unfortunately the animation speed is low so I'm just spending most of the game time sitting there and waiting for all the enemies to move. :( The sounds are very fun to listen to!

Jupiter Hadley: It's cool you took a game that's much bigger and packed it into a smaller game!