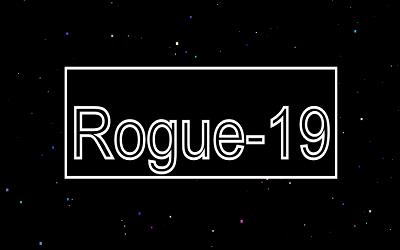 Your planet is under attack from an alien civilization which is waging chemical warfare by sending viral pathogens through space toward you.

You are the first in a series of clone pilots sent to destroy the pathogens and the final boss, the Incubator!

Rogue-19 is a "rogue-like" 2D scrolling shooter. Your ship levels up upon death or completion of the game. Progress is saved to local storage.

I was hoping to improve the rendering and make the cells infectious upon proximity, but ran out of time, but there is a boss battle, at least!

Ania Kubów: I enjoyed the opening sequence and found the game easy to understand and get playing straight away. An impressive 2D scrolling shooter. I would love to see a variety of viral pathogens in the future.

Raf Mertens: Visually the game is smooth and the transitions are nice. I like the concept of a roguelike game set in space as I find those games to be very addictive. I think it's a creative way to meet the brief here too. With the gameplay, I think there could have been more focus into the enemies and battling. I did however return for several rounds as these games tend to get under my skin. WASD + space didn’t work for me personally as the controls. The option to use arrow keys + spacebar or allow click to shoot would have been more comfortable.