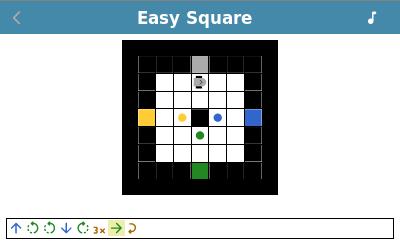 Robot Coder is a game about coding a robot to run offline.

You enter the code for the robot to move and to bring items to different targets. Then you start it, and it will run without any way by you to interfere in what it’s doing. So you have to plan ahead to make sure the robot runs the way you want it to run.

* The game starts with some tutorial levels to help you learn how to run the robot.
* Once you unlock them, there are many more levels, both easy and difficult.
* Your progress is saved, so you can always come back and try to improve your previous results.
* The game has an integrated editor (you are required to solve some levels first to unlock it), that allows you to create, play and share your own levels.

Spartez Team: Everything works nicely, it's a little too simple for my taste. Later levels are getting bigger but not more complex. It's because language is a little to simple for complexity to occur. Usually levels would be categorized more on solution subjects (like loops, subroutines etc) then visuals. Also I miss something weird/innovative. It's boring after like 5 minutes. I'd assume you know Zachtronics games, but if not look for some inspiration there (I've no connection with them it just fits the subject so well...). I do like the effort to do create the tutorial. Graphics are simple but esthetic and clear. Some icons are confusing. There is incentive to find shortest solution. I wonder how it's calculated (would it work for manual editor? tested: no) It wasn't obvious that you need to be in front of the object and not on it. Some hands in front of the robot would give a hint. Also then I'd expect object to still be in front of robot (just hold by hands). Icon for grab and drop should be not arrow but some hand or sth. It's too confusing now. Some random ideas: For more complicated programs step debugger would be nice. Allowing for subroutines and or threads would make it finding for two solutions shortest and fastest. Maybe some highscore to compare with friends. It could get really interesting (but also difficult...) if it had some sensor and level content would be somewhat randomised (but then it contradicts with highscore idea). Dropping item with empty hands could result in no error - that would allow for more code reuse. Could allow for >1 robots. They would do the same program all at once. Crushing one could be failure or just continue with others.