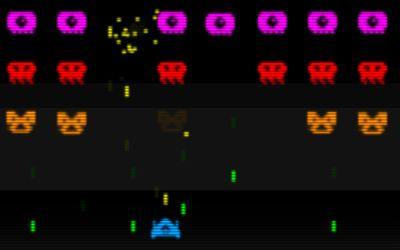 It's Space Invaders but not as you know it! Use the arrow keys to control the alien horde against the invading human ship! Coil subscribers get faster lasers and bigger explosions!

Anonymous: Love the inversion taking place here - it's about as fun playing the aliens as it is the spaceship. It's a lot like a reverse bullet-hell game where there are few bullets, but many ships. Only improvement I think could be made is some sound effects from the original space invaders. Anonymous: Nice idea :). Also you provided full game experience, with starting screen title and highscore in the end. Esthetics nicely correspond to original game. Sound fits too. There is not much to make me play it more than 1-2 times. And it's hard for me to think about ways that this design could be expanded. Maybe some more interesting player movement pattern? There is some bug when "player" dies it blinks a few times. Code is simple, readable as it should be. Anonymous: Brilliant idea! And well executed. Nice retro graphics and sound effects.
back