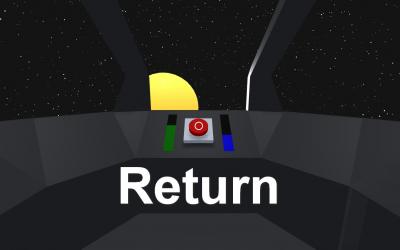 You were one of the select few chosen to trial a new hyperspace jump drive. You reach towards the red jump button in the front of your cockpit as directed; there is a whooshing noise as the jump drive spins up. Space and time warps around you, suddenly there is a bang and the ship drops out of hyperspace. 'This isn’t the correct destination' you think to yourself, the jump drive must be faulty. Return is a game about finding your way back home after being lost amongst the stars. ('Home' is the blue planet of course, a.k.a Earth).

The game is controlled with just a click input, look around to move the cursor and tap or click to press objects in the ship's cockpit.

Good luck, hopefully you will find your way back!

Sébastien Vandenberghe: Being alone lost in space is so dramatic that I love it ;-) A real good use of VR and its limitation has been done and the graphics despite being simplistics look real good. The only struggle was to find out how to use the buttons.

Josh Marinacci: I could play the game on an Oculus Quest because it is looking for taps instead of a game controller click. However, the game looks good and is a clever design.

Fernando Serrano Garcia: Nice concept. I like a lot the UI with the map and the buttons although I wish I could get some more info on top of the buttons as I was pressing them randomly :D

Diego González: The story is interesting and gets you into exploring your wayt back. I got lost during the game and I think it could benefit from hints, clues and guiding the player into next steps. Some in-game indications of what each bar means could help as well. I like that you have added sound to the game, and maybe a subtle always on ambient one could help make the environment better. I like that the game can be played with a mobile device and with a headset as well, possibly addind controller support might be a good idea to adapt to higher end frameworks.

Jupiter Hadley: Your game doesn't load when I tried to play it.