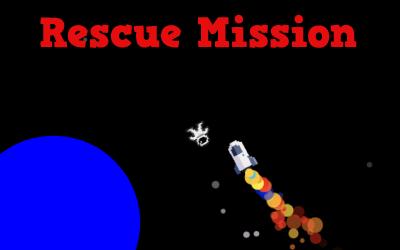 Many astronauts have been lost in space, it is up to you to bring them home, this is a rescue mission.

Objective:
Rescue as much (3 per level) astronauts as possible and then make a safe landing on the blue planet.
For landing the rocket one should go slowly (less than 70km/h) and as much perpendicular (less than 45 deg) to the planet as possible. Don't forget to use the gravity wisely, it can help you reach places you couldn't get to with just your thrusters!

Christer Kaitila: what an amazing simulation! it was so cool to just barely slingshot around one planet with almost zero fuel to land on another after many attempts! the level with the rings around the planets finally destroyed me, but what an adventure! it was just the right level of challenge, and felt almost elegant in a way. nice work

Lee Reilly: Very challenging indeed. Had I paid more attention to my university physics courses, I'm sure I'd have fared better. The astronauts will probably survive longer if I don't try and rescue them! Joking aside, this is very well done. Since I have access to the source, I might give myself infinite fuel and experiment a little with all of the levels 👩🏻‍🚀

Victor Debone: Great execution! Thanks for your submission :) You took care of great details like the increase of velocity and the zooming, it's probably a must for space games and you fulfilled the requirements! I really liked the controls and the feeling of the rocket. Unfortunately, for the astronauts, I only managed to rescue the three from the first mission. I tried dozen of times and either I was running out of fuel or crashing into the surfaces. It turns out piloting rockets is not an easy task :P Maybe if I had more fuel I could take my time to put the rocket back into place and slowly descend. I'm curious if you had a chance to put this into more hands before submitting, these show up really fast in play testing, I recommend!