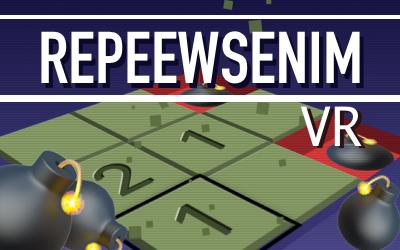 _Repeewsenim_ is derived from the classic game of Minesweeper. The twist here is that you need to play it backwards, in reverse. You know where the bombs are, and need to put correct numbers on the tiles.

Sébastien Vandenberghe: Creating a revamp of a Game in VR is pretty smart to stick with the theme Back. And puzzles are always a win. I wonder how the full 3D world could have been used with a small twist of the original to trully benefit from the VR capabilities alltogether ?

Josh Marinacci: the music seems nice but I can't actually play the game. It doesn't seem to use the controllers on the Quest. I can't click the start button.

Jason Carter: Fun game. It would be helpful to see controls on the screen before you start the game.

Fernando Serrano Garcia: The idea is interesting but the execution needs a bit more work. In VR it looks way too far from the point of view and it makes me feel uncomfortable looking up all the time to hit the boxes.

Diego González: I enjoyed the music, but had some trouble with the onboarding. As a person that doesnt understand minesweeper I really didnt know what to do and the game did not offer an explanation. The start button did not disappear, making it confusing and prone to restart. The camera position was always too low on the ground, which made it uncomfortable to look and play. Gaze (fuse) per se did not work, but tapping did. Tried it on an Oculus Rift in Firefox and on Samsung Internet on a Note 10 device. Game behave the same inboth platforms. (thats good). Game has potential, but feel too unfinished at the moment.