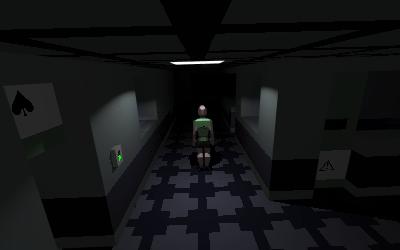 You've accidentally fallen down into a hidden bunker while participating in the latest viral Facebook event, Raid Area 404 (don't bother looking, it's a private group). There seems to be something down here with me, better get out as fast as I can.

Should you need to use stealth for any reason, it works this way. An opponent can see in all directions at all times, but cannot see around corners (much; make sure you get right into the corner if you are hiding in a small space). Running makes noise, which will bring enemies to your location, however walking is silent. Due to the environmental conditions, visibility is limited to approximately 7 meters (your character is 1.5 meters tall, for reference).

Jupiter Hadley: Sadly, the game was super laggy for me and I found that not being able to control the camera challenging.

Spartez Team: Very nice esthetics and camera inspired with Resident Evil. It's well known fact that such camera has blind spots. It requires a lot of testing. You can treat it as feature, but many players will be annoyed. I had to run it on firefox, on chrome it was just 2fps or sth. Not quite sure why, but maybe some hardware acceleration didn't kick off or some weird feature was used. You can think about for the future. Movement without a 2D map can get you lost very quickly, especially with camera jumping around and changing directions. And then you need to start hiding :). I think one reason why Resident Evil was instant classic was that there was a threat but it wasn't as dangerous as it seemed. So player was constantly afraid but could just go on. I'd make sure that player can see a danger from the distance and has plenty of time to react. It's more of risk/reward situation. When he gets caught it's because he risked too much. Then he can only blame himself... Another idea would be to hide in some containers or closets. Then you could automatically autosave. You would need to make sure that there is no instant dead loop, maybe removing monster for some seconds after restoring? Overall it was a good and complete experience. I wrote more ideas than usual, because I appreciate what you did there and tried to give you some wider perspective.

Michelle Mannering: Woah! Crazy graphics for a <13kB game! Great work. This is really hard to implement in less than 13Kb. There's a lot of issues with it being role playing game and a third person game. The camera doesn't follow the player and once you move the controls should also follow you. Controls are currently locked to the character's original position. It's a little jarring for the player. But this is still an amazing effort. There's a lot in the game, love the emoji. Lighting effects are cool too. Just need to get the controls right for the player and you're sweet! Plus some interaction in the game itself would be good. Ie. when you come to a trigger point "Press A to interact".