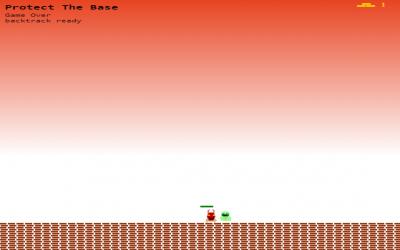 A game inspired by Dota's last hitting mechanics. Don't let your base fall as you get the last hit on creeps and obtain gold. Utilize your special skill "backtrack" to push the enemy back and give you a tiny bit of breathing room!

spacebar to attack the enemy

Anonymous: Good: - Good use of the back theme, the backtrack mechanic works. - Implementation: Game sprites are drawn using canvas API What could be improved: - Hero movement control is not that smooth could've made it move smoother while holding the arrow key - Hero's attack range is not clearly visible to people, or maybe it's too short which make it harder to hit the enemy - The Game over indicator is too small

Florian Rival: Interesting gameplay mechanics but hard to get if you never played! Good once you know how to play, though the game feel a bit slow - making the character a bit faster would have been maybe good? Nice job :)

Anonymous: I would have appreciated to see the instructions and keybindings on a start screen instead of being thrown straight into the action. Movement felt a bit sluggish. It felt like I was moving on a key repeat callback which made movement feel stuttering and not so smooth. I could also not move diagonally. I’m not sure what the best tactic is, but I felt that it was really hard to move out and meet the enemies since moving and attacking at the same time was nearly impossible. And the health was depleted really fast. The backtrack ability helped a bit but I kept dying too fast. I would also suggest to put the Backtrack ability keybinding somewhere other than backspace since it made it awkward to use it.

Jupiter Hadley: Movement really let's this game down. I wish I could move more swiftly or attack while moving. The graphics are neat though and I do like the words that appear when you do attack.