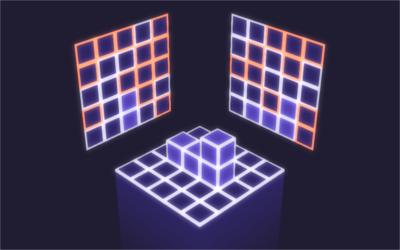 Create a pattern of cubes that matches the projection in the back.

Sébastien Vandenberghe: I love this kind of voxel puzzle !!! It really highlights and benefits from a full 3D environment. You did a great job at using Babylon here but I wonder if the full bloom is necessary maybe only the set blocks could shine ? Having it everywhere was somehow disturbing and felt like I could not focus correctly.

Josh Marinacci: It's definitely a clever game and the graphics look good. I couldn't figure out how to remove a block, though. You should polish this up and turn it into a real game. With some music, better controls, and multiple levels this would be a really fun game.

Diego González: Nice idea, elegantly presented. One of the most challenging entries I've seen so far, this puzzle game really gets you involved. I think the game could benefit from a couple of things, first, adding text or graphics that explain how to remove cubes (its not intuitive and it took me some button smashing in order to get to the right button). It could also have a way of moving vertically since I found myslef going over a chair to position cubes in the top most level (using an Oculus Rift with Firefox and on a Note 10 with Samsung Internet). It worked and I can't state enough how much I like the color scheme and the design itself!

Fernando Serrano Garcia: Great work! One of the best mechanics in the competition. Original and clever concept. I just missed a way to rotate around the piece simpler, like mapping the rotation of the scene to the rotation of the controller when you press a button or so.